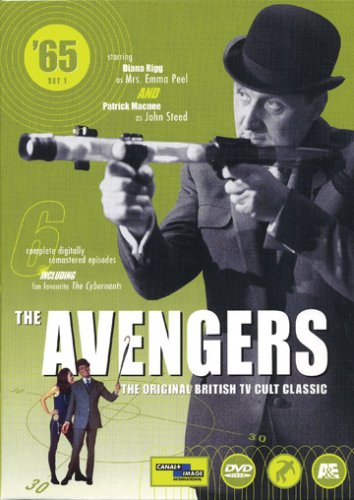 A toast to A&E for releasing this two-volume set of vintage episodes from the fourth season of The Avengers. The Avengers debuted in Great Britain in 1961 (predating the James Bond films), but it was not until the late 1960s that it found a welcome home in the United States. Unlike other baby-boomer-era series, The Avengers was not widely syndicated or officially released on home video. This may be one reason why these rarely seen episodes seem as cool as when they first aired. Another reason, of course, is Diana Rigg in her signature role as the ravishing Emma Peel, partner to Patrick Macnee’s urbane, umbrella-toting spy John Steed who is every bit his equal in dispatching villains or engaging in provocative banter. What makes this collection of particular interest is that these episodes introduced Mrs. Peel. Steed and Mrs. Peel were the Mulder and Scully of their time; they investigated extraordinary goings-on in the most ordinary locales, such as a seaside town populated by sinister imposters, in “The Town of No Return” or a department store that has been rigged with a nuclear bomb, in “Death at Bargain Prices.” Also included is “The Cybernauts,” which was the first Avengers episode to be broadcast in America. It is representative of the series’ best, with its automated assassins and a colorful madman who plots to install an electronic dictatorship. Other episodes are the haunting “Castle De’ath,” “The Gravediggers,” and “The Master Minds.” All are in glorious black and white and highly recommended. –Donald Liebenson
Aspect Ratio ‏ : ‎ 1.33:1
Is Discontinued By Manufacturer ‏ : ‎ No
MPAA rating ‏ : ‎ NR (Not Rated)
Product Dimensions ‏ : ‎ 7.5 x 5.38 x 0.6 inches; 7.2 Ounces
Media Format ‏ : ‎ NTSC, Box set, Black & White
Run time ‏ : ‎ 5 hours and 40 minutes
Release date ‏ : ‎ August 31, 1999
Actors ‏ : ‎ Patrick Macnee, Diana Rigg, Honor Blackman, Linda Thorson, Ian Hendry
Language ‏ : ‎ English (Dolby Digital 2.0 Mono)
Studio ‏ : ‎ A&E Home Video
ASIN ‏ : ‎ B00000JMQJ
Writers ‏ : ‎ Sydney Newman
Number of discs ‏ : ‎ 2